The recent Swastika emblazoned individual who allegedly used a makeshift flamethrower to racially abuse an Indigenous woman and her daughter is disturbing.

Is the Accused Mentally Unwell?

The accused here is currently being assessed under guard in hospital. This of its own says volumes about the accused. A finding that an accused is mentally unwell, does not without more excuse or provide a defence. A reliance on mental aberrations whether drug and or alcohol induced, or otherwise, are often trotted out in courts as some sort of defence.

It is a rarity that mental impairment will relieve an accused of criminal responsibility.

The recent decision of His Honour Chief Justice Quinlan in the case of Teancum Peterson-Crofts, a man with a clinical history of schizophrenia is telling.

His Honour found that he was not guilty of murdering his mother, sister and brother on the basis that he was at the time experiencing a psychotic episode. The finding is correct but indeed atypical of most individuals presenting in WA criminal courts claiming mental deficiencies.

Turning back to the current so called neo-Nazi perpetrator, only time will tell whether the accused should be relieved of his criminal responsibility on the grounds of mental impairment.

It must be emphasized that the Rule of Law means that justice must prevail at all times for an accused and a complainant irrespective of what is said in the lead up to a properly instructed court of law determining the matter. 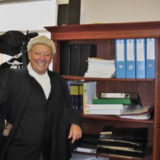